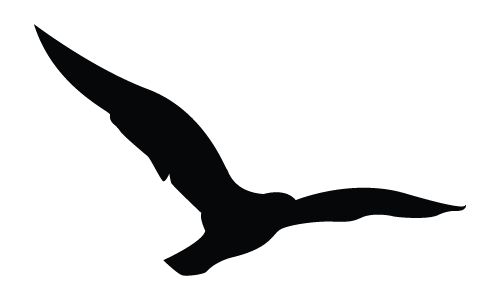 SEEKJOY is a community “brand” catalyzing a loosely defined and primarily un-affiliated community of humans calling for radical social change via art & activism.

The brand’s symbol is that of the lone gull, rooted in the story of Jonathan Livingston Seagull.

Long story short… Jonathon Gull is outcast from his flock for pursuing the joys and limits of his personal capacity for flight.

The older gulls who are responsible for his banishment insist that flight, for the seagull, serves only as a means of maintaining the daily routine of retrieving food from nearby ships in order to live as long as possible. Seagulls in the flock who are unwilling to accept this ideology are not welcome in mainstream seagull society. Jonathan Livingston Seagull did not accept this ideology.

The seagull’s physical form is not designed like the hawk’s for dynamic flight at high speeds. However, through commitment and persistence Jonathan learns to control his wings by just the slightest movement of individual feathers. With this understanding, Jonathan gull is soon able to control his flight with precision at high speeds nearing the threshold of terminal velocity.

After years in exile spent alone pursuing his own truth, Jonathan is called back to his flock by a new group of younger gulls which have begun, like him, to pursue these joys in flight, deviating in their own ways from what has always been the ways of the gull. Though never fully welcomed back into the mainstream of seagull society, it is clear by the time Jonathan gull leaves these young students that a world of possibly has been opened for future generations both near and far.

The story of Jonathon Livingston Seagull by Richard Bach is available at your local bookstore. There are also several audiobook readings you can find with a quick search on Youtube.

All in all, the SEEKJOY Community is on a Mission.

We’re calling for radical social change and pledge to catalyze immediate efforts towards the long-term, sustainable cohabitation of all people, nations, and cultures.

Unlike traditional non-profit organizations, SEEKJOY is an independent, grass-roots entity. Our initiatives, goods, merch and services are modeled on the principles of social entrepreneurship.

Social Entrepreneurship, as defined by the community on Wikipedia:

“Social entrepreneurship is the use of start up companies and other entrepreneurs to develop, fund and implement solutions to social, cultural, or environmental issues. This concept may be applied to a variety of organizations with different sizes, aims, and beliefs. For-profit entrepreneurs typically measure performance using business metrics like profit, revenues and increases in stock prices, but social entrepreneurs are either non-profits or blend for-profit goals with generating a positive “return to society” and therefore must use different metrics. Social entrepreneurship typically attempts to further broad social, cultural, and environmental goals often associated with the voluntary sector in areas such as poverty alleviation, health care and community development.”

The Climate Crisis might just be the final test – what are humans going to do in the face of widespread resource shortages? How are we going to come together as human beings in the face of this existential threat? Is technology the answer? How must our social ways radically change in order to bring peace and solidarity across the globe? Regardless of how you came across the SEEKJOY project you’ve found yourself right here, right now. Keep talking. Get out in the streets. If you feel called by a conversation you’ve had with someone wearing a SEEKJOY patch, maybe get one of your own and wear it as your “brand” because it is. Sending love – we’ll see you on the front lines!