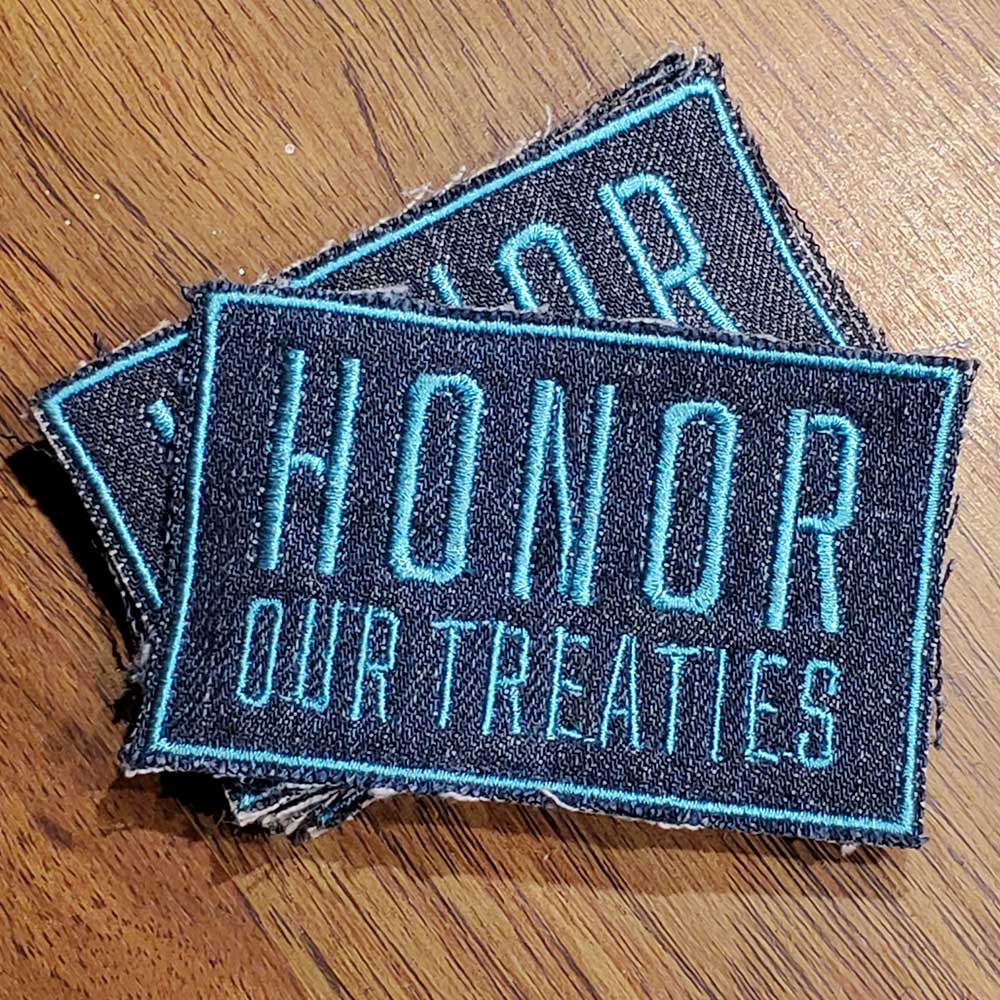 Much of our focus throughout the spring of 2021 was providing support to the organizing efforts behind the “Treaty People’s Gathering: Rise, Protect Stop Line 3” which took place June 5-8, 2021 on the White Earth Reservation in Northern Minnesota.

The Treaty People Gathering was a multi-day event which lead into a series of non-violent direct actions to stop the active construction of the Line 3 Tar Sands Oil Pipeline, the largest expansion of fossil fuel infrastructure underway in North America being built across Northern Minnesota.

The central theme of the event/gathering was that “We Are All Treaty People” – a phrase spoken often by the indigenous women leading the RISE Coalition.

We Are All Treaty People!

The Senators and Representatives before mentioned, and the Members of the several State Legislatures, and all executive and judicial Officers, both of the United States and of the several States, shall be bound by Oath or Affirmation, to support this Constitution; but no religious Test shall ever be required as a Qualification to any Office or public Trust under the United States.

Much of Earth’s remaining biodiversity remains in the hands of indigenous peoples, and much of that land is subject to the jurisdiction of Treaties. In Northern Minnesota, where the Line 3 Pipeline is being constructed, just about the entire corridor falls within the bounds of Treaty Territory that was ceded by various tribes of the Sovereign Anishinaabe Nation to the US Government throughout the 1800s.

Treaties, by definition, are agreements made between sovereign nations. Agreements, as defined by the Oxford Dictionary, are, “a negotiated and typically legally binding arrangement between parties as to a course of action.” The United States Government is engaged in a centuries-long genocide against indigenous people, with a long history of dishonoring Treaty obligations which were the “promised courses of action” to be exchanged for the western concept of “land ownership.”

In the battle to #StopLine3 in the courts of Minnesota, every Tribal Government inside the boundaries of the state was initially in opposition to the proposed Line 3 Tar Sands Oil Pipeline. Although the Fond Du Lac Band was forced to change their position on the project in what Honor the Earth‘s Executive Director Winona LaDuke has called a, “Sophie’s choice decision,” even to this day there are active legal challenges from the remaining tribes to stop the project. In every instance of the years-long permitting process for Line 3, Treaty-based arguments were denied.

Various courts & governmental bodies such as Minnesota’s Public Utilities Commission, Department of Natural Resources, Pollution Control Agency, etc threw out treaty-based arguments and essentially claimed jurisdiction at the State-level of affairs in Indian Country, which has led to approving the largest expansion of Tar Sands oil infrastructure in North America at a time when the Oceans are on fire, and temperatures on the west coast have hit 115 degrees Fahrenheit. Scientific consensus is that we, as humans, must drastically scale back our use of fossil fuels and Minnesota’s various state-level agencies have committed the planet to 50+ years of expanded fossil fuel extraction.

We must Honor Our Treaties. As US Citizens, we must demand our elected officials uphold the obligations our forefathers made when the treaties were signed. Any soldier, officer of the law, or elected official is responsible to uphold the Constitution of the United States, and must therefore honor our treaties. Honoring of our treaties, and holding our elected officials accountable to Article VI of the Constitution, must be central to our theories of change regarding how to address the next leg of our journey as two-leggeds. We Are All Treaty People. 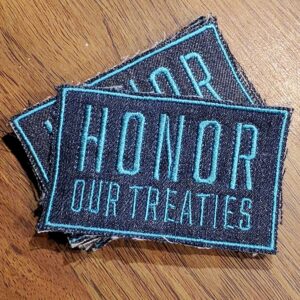 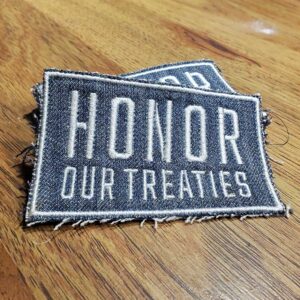 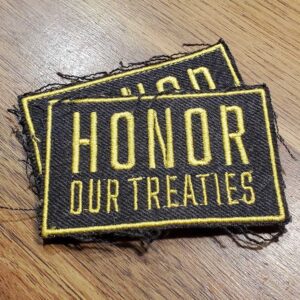 Over the past month we have began running “Honor Our Treaties” patches, and are making them available in the SEEKJOY Community Marketplace. These patches are similar to our others, in that they are embroidered off-grid via solar power on upcycled, landfill-intercepted denim fabric.

Purchasing goods from our online Community Marketplace is the funding mechanism that supports the on-going work of this project. We appreciate your support!